See the world from Gulliver's perspective in MINILAND, the centerpiece of every LEGOLAND® Park.

See the world from Gulliver's perspective in MINILAND, the centerpiece of every LEGOLAND® Park. Nationally and internationally known buildings have been rebuilt in detail on a scale of 1:20. Guests from Germany will recognize buildings from their home area. You can stroll past the Berlin Reichstag, Frankfurt's financial district or the Allianz Arena in Munich. Visitors from Italy, the Netherlands and Switzerland, too, will find buildings from their home countries. Our Italian guests will love our version of Venice. All the buildings are worth a close look, to see what's happening in and around them. LEGO® figures are working on the facades, strolling through the streets, and can be spotted hiding behind windows. The whole of MINILAND is animated, and guests - big and small - can bring the models to life by pressing buttons and turning switches. 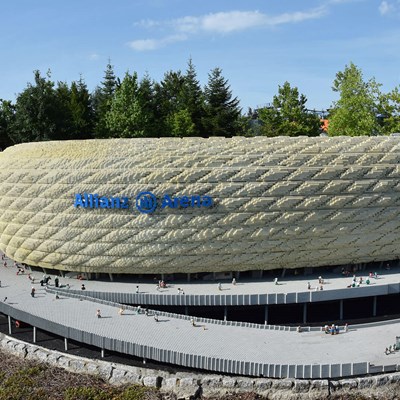 The LEGOLAND® Allianz Arena was built according to the original construction plans and from one million LEGO® bricks. The illuminated exterior shell was a special challenge, as round structures are difficult to recreate with LEGO bricks on the one hand. On the other hand, it was not possible to replicate the colour-illuminated cushion covers of the stadium close to the original with any yet existing LEGO brick. Therefore, a translucent special LEGO brick was created for this project. This made it possible to light the Stadium with the help of 5,000 LEDs – almost like the original – in the colours red, blue and white.

The visitors were also involved in the building process of the LEGOLAND® Allianz Arena: Among the 30,000 LEGO miniature fans are 100 from LEGOLAND visitors creatively designed mini-fans in the lower left and right stands. 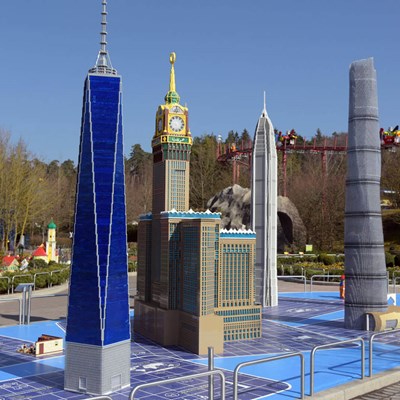 Here, park guests will be totally flabbergasted, as five of the tallest skyscrapers in the world have been reproduced using more than 400,000 LEGO® bricks on a scale of 1:150. 13 designers have worked for you for six months on the following skyscrapers: Burj Khalifa (Dubai), Ping An Finance Center (China), Shanghai Tower (China), Makkah Royal Clock Tower Hotel (Saudi Arabia), One World Trade Center (USA). The tallest building, the Burj Khalifa – which is 828 meters tall in the original version – is also a true giant in LEGO format at over five meters in height.

In addition, you can admire the Eiffel Tower and the LEGOLAND observation tower as LEGO reproductions. The latter is built to a scale of 1:150, meaning that it is only 35 cm high. Lighting and sound effects bring the High Five to life. 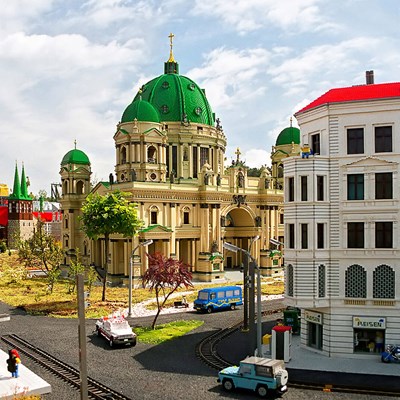 Berlin in MINILAND: Here Germany’s capital city has been reconstructed on a 1:20 scale.

High, higher, the highest: Frankfurt is nicknamed ’Mainhattan‘. Anyone who sees the skyline of ’FFM‘, dominated by skyscrapers, could be forgiven for thinking they were in the USA. The towers of banks and other commercial buildings of ’Mainhattan‘ soar up to 259 m. The Trade Fair Tower with its pointed roof stands proud at 257 m and is one of the tallest office buildings in the world. With a height of four meters, the tower in MINILAND is no less impressive. It comprises of 925,000 LEGO® bricks. If model builders had kept to the usual MINILAND scale of 1:20, the Trade Fair Tower here would be 12.80 m high.

The cables located in the ground for the induction loops make it possible for cars to avoid obstacles. The ground is coated with a rubber compound so that the tires on the cars have the best grip possible. 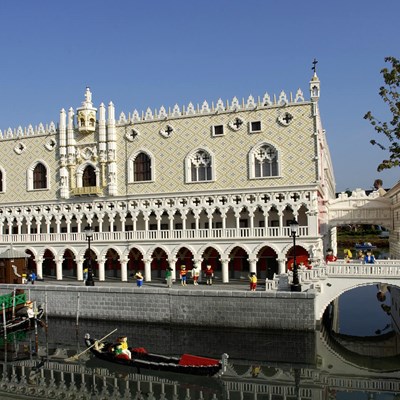 Venice in LEGOLAND® MINILAND: Stroll past the Doge’s Palace and St. Mark’s Basilica.

The “Doges” were the Council-elected Venetian heads of state, who resided in the “Palazzo Ducale” – the Doge’s Palace (constructed in the 14th/15th century). LEGO® designers have reconstructed the huge, cube-shaped building with its lively arcades in the MINILAND, a process involving countless hours’ work.

Although they may not all seem familiar, all the LEGO® pieces that the model-builders use are available to buy in stores. If you had enough bricks, you could reconstruct the entire MINILAND! There are as many as 1,200 different shapes and 19 different colours. Some pieces are put to very creative use: the curls on the LEGO figures, for example, are made from hinges.

Be enchanted by the true-to-life replica of the fairy-tale castle of King Ludwig II!

The model of Neuschwanstein Castle, built to a scale of 1:30, was constructed using more than 300,000 LEGO® bricks. It is an impressive 4.5 metres long and a full 3 metres tall. More than 400 windows in 30 different shapes were made for the model.

By the way: King Ludwig II owned a golden ceremonial carriage, which you will also find here in LEGO® form, in front of the castle.

Neuschwanstein Castle is the first LEGO® model to be produced entirely in LEGOLAND® Germany, from the initial concept to the finished construction (the various other models were built in the Danish town of Billund and then transported to Günzburg). Six model-designers worked for six months, assembling more than 300,000 LEGO bricks. The model weighs more than 300 kg and has been on display in MINILAND since April 2003.

Take a trip to Switzerland! Lucerne and the Bernese Oberland await.

It goes without saying: in every MINILAND area, care has been taken to accurately replicate plant life. Take a look at the difference between the plants in the valley and those on the mountain! When you hear Switzerland – what do you think of? Of milk and cheese, delicious chocolate, watches, Heidi, William Tell (the guy with the apple), mountains, lakes...? All this is correct – however, there is much more to Switzerland. The Alpine nation consists of 26 Cantons, and the capital city is Bern. And in spite of the country being fairly small, four languages are spoken here: German, French, Italian and Rhaeto-Romanic. However, Switzerland is one thing before anything else: a wonderful holiday destination, with unlimited possibilities. Discover the Port of Hamburg, complete with miniature jetties and ships, in LEGOLAND MINILAND.

The jetties here in MINILAND are around nine metres long, consisting of 367,400 LEGO® bricks with a total weight of 417.5 kg.

Do you ever dream of setting sail in a real “Windjammer”? Those of our LEGO® friends who fancied putting in a few shifts as deckhands spent 640 hours building the replica of the “SS Rickmers Rickmers” sailing ship, which once navigated the world’s oceans – and they used a total of 74,000 LEGO bricks.

In LEGOLAND® Miniland, rural Swabia is represented by the Maria Vesperbild Church.

Not far from here, between LEGOLAND and Augsburg, is Ziemetshausen, home to the Maria Vesperbild Church – a popular pilgrimage site. Each year it is visited by 400,000 pilgrims and is a popular church for weddings, as you can see from the wedding party at the entrance. The finished model was inaugurated into MINILAND by a high-ranking dignitary of the church: Monsignore Imkamp, Maria Vesperbild Pilgrimage Director and custodian of the actual church.

Around Günzburg and the LEGOLAND Germany resort, there are many farms, for both agricultural and livestock. The milk from the “happy cows” is bottled and processed in the dairy. Things are really moving in the MINILAND and also in the pretty houses, which are open at the back. It’s not without reason that people speak of “flowing Swabia”... In the land where milk and cream flow, the cows in the cowshed moo at the touch of a button – give it a try!

Amsterdam and a Dutch rural landscape - complete with windmills - look forward to your visit.

The first windmills were built in the Netherlands back in the Middle Ages. Many of them were equipped with bucket wheels and were used for lifting water and for draining swamps and lakes.

They were sung about in an old pop song – tulips from Amsterdam. Holland is a country in bloom, and this is evident in the greenhouses that can be found practically everywhere. This is also true here in MINILAND. In the two greenhouses, our model builders also produced vast quantities of the colourful flowers. What do you think, how many do you think there are? If you count correctly, you’ll find exactly 6,285 LEGO® tulips.